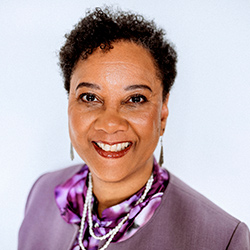 “As a biblical scholar living in times such as these, I believe that I am called to assist those who desire to respond to injustice, intolerance, and multiple forms of oppression with a sound biblical and theological foundation find their own voice.”

The Rev. Dr. Vanessa Lovelace is an experienced Hebrew Bible/Old Testament scholar. She has taught introductory Hebrew Bible/Old Testament, biblical exegesis and elementary biblical Hebrew courses, as well as womanist biblical interpretation and Bible, Race, Gender, Sexuality and Pastoral Care, an interdisciplinary, team-taught class. Her areas of expertise include Deuteronomistic History, Hebrew Bible prophets and prophecy, and women and gender in ancient Israel. Her teaching and research interests include interpreting biblical texts using literary criticism and theory of gender and nation through a womanist lens. Her co-edited volume with Gay L. Byron, Womanist Interpretations of the Bible: Expanding the Discourse, contains essays that bring a womanist analysis and thought to the interpretation of biblical texts to reveal the inherently simultaneously interlocking dynamics of race, gender, sexuality and class in the texts and contemporary black women’s lives. The essays address current issues such as the Black Lives Matter movement, domestic violence, human trafficking, and hip-hop culture. She also has a chapter in The Hebrew Bible: Feminist and Intersectional Perspectives edited by Gale A. Yee and articles in The Oxford Encyclopedia of Bible and Gender Studies and The Journal of the Interdenominational Theological Center.

Her current research project is a monograph titled Outsider-Within: A Womanist Reading of Hebrew Bible Narratives as the Politics of Belonging that analyzes certain biblical Israel’s narratives for how they were used by both the writers and later U.S. readers of the texts to include some and exclude others as group members. She examines the interlocking identity categories of race, gender, sexuality and class used alongside the biblical texts to exclude blacks in general and black women, particularly, as U.S. citizens. Her guild service includes co-chairing the Women in the Biblical World Unit of the Society of Biblical Literature and serving on the American Academy of Religion Committee on the Status of Women in the Profession. She is a member of the editorial board of Biblical Theology Bulletin, a distinctive, peer-reviewed, quarterly journal. She is also an ordained minister in the United Church of Christ.