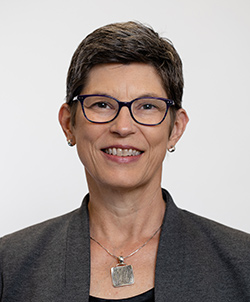 Dr. Julia M. O’Brien has held the Paul H. and Grace L. Stern Chair of Old Testament/Hebrew Bible at Lancaster Theological Seminary since 1997. From 1989-1997, she served on the faculty of Meredith College in Raleigh, North Carolina.

Julia received a BA in Religion from Wake Forest University in 1981, a MDiv from Duke Divinity School in 1984, and a PhD in Hebrew Bible and Semitic Studies from Duke University in 1988, where her areas of study included the history and archeology of the Old Testament as well as Judaism and Literary Criticism.

Her academic specialties include the prophetic literature of the Hebrew Bible (especially the Minor Prophets); the intersection of gender studies and biblical studies; theological, feminist, and ideological approaches to prophetic books; ethical issues in biblical interpretation; theology of the Hebrew Bible; violence; metaphor; images of God; and reading the Bible as literature.

She is the editor of the Oxford Handbook of the Minor Prophets (2020) and Editor-in-Chief of the Oxford Encyclopedia of the Bible and Gender Studies (2014). Her publications include Micah (Wisdom Commentary Series. Liturgical Press, 2015); Nahum (Sheffield Academic Press, 2001); Nahum through Malachi (Abingdon Old Testament Commentary series, 2004); and Challenging Prophetic Metaphor (Westminster John Knox, 2008). With Chris Franke, she co-edited Aesthetics of Violence in the Prophets (T & T Clark, 2010).

Julia lectures on various topics related to the Bible and contemporary culture, including (homo)sexuality and the Bible; the family in ancient and modern perspectives; and secular readings of Old Testament narratives.

She has served on numerous committees of the Society of Biblical Literature, recently completing two terms on the Committee for the Status of Women in the Profession.
An avid vegetable gardener, she lives in Lancaster County with her husband, David Mull.