Paul and Minnie Diefenderfer Professor of Mercersburg and Ecumenical Theology, Professor of Church History and Director of the Doctor of Ministry Program 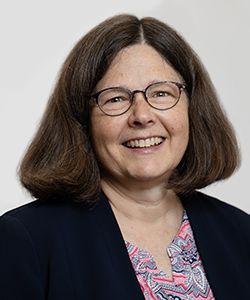 Dr. Anne T. Thayer is the Paul and Minnie Diefenderfer Professor of Mercersburg and Ecumenical Theology and Professor of Church History at Lancaster Theological Seminary. She received a PhD in Religion from Harvard University in 1996. As a teacher, she enjoys introducing students to primary sources in Church History and to major historical streams of Christianity in Living Christian Movements I. Her electives include Exploring Christian Mysticism, Mercersburg Theology, and Theology and Natural Science. Anne also chairs the Doctor of Ministry Committee and often teaches the Major Project Proposal Preparation class.

As a historian, Anne is particularly interested in late medieval and early modern Christianity, the history of preaching and pastoral care, and the popular communication of religious ideas. She is best known for Penitence, Preaching, and the Coming of the Reformation, a survey of late medieval printed model sermon collections and their function in preparing for the varying responses to Luther’s claim of justification by grace alone. Anne’s current research examines the marginalia of Thomas Swalwell, OSB, monk of Durham. Swalwell’s many annotated books are windows onto the life and work of a dedicated monk on the eve of the English Reformation. They reveal his lifelong scholarly studies, concern for the integrity of the clergy, administrative duties, and response to the impending religious changes. Anne is president of the International Medieval Sermon Studies Society and is active in a variety of other professional organizations including the American Academy of Religion, American Society of Church History, and Mercersburg Society.  She resides in Lancaster with her husband, John.

Editor with Douglas Jacobsen, Christ, Creeds and Life: Conversations about the Center of Our Faith, Cleveland: United Church Press, 2007.

Penitence, Preaching and the Coming of the Reformation, St. Andrews Studies in Reformation History, Aldershot: Ashgate, 2002.

“Books for Preaching and Preaching with Books: Late Medieval Latin Printed Sermons and the Witness of Thomas Swalwell of Durham Priory,” in Circulating the Word of God in Medieval and Early Modern Europe: Transformative Preaching Between Manuscript and Print (c. 1450 to c. 1550), eds. Veronica O’Mara and Patricia Stoop, Sermo: Studies on Patristic, Medieval and Reformation Sermons and Preaching, Forthcoming.

“Ministry in the Margins: Thomas Swalwell OSB and His Marginal Notes for Preaching on the Clergy,” The Sixteenth Century Journal 47 (2016): 599-627.

“Selections in a World of Multiple Options: The Witness of Thomas Swallwell, OSB,” in Religious Orders and Religious Identity Formation, ca. 1420-1620: Discourses and Strategies of Observance and Pastoral Engagement, eds. Bert Roest and Johanneke Uphoff, Brill, 2016.

“Learning to Worship in the Later Middle Ages: Enacting Symbolism, Fighting the Devil and Receiving Grace,” Archive for Reformation History 99 (2008): 36-65.